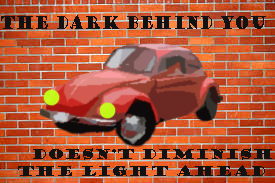 For those who don’t know, Banksy is a very well known street artist in England who travels around and leaves his works in public places for the world to see. The art usually is a picture that evokes a strong message to the viewer, or sometimes a picture and words to get the point across the way he wants to. For example, one his works has the words “Follow Your Dreams” written on a wall. Next to it is the depiction of a man who is covering these words up with his own words, which read “CANCELLED”. Through art like this he is able to express a very large message with ease, and they aren’t always negative like the example I gave. The problem with Banksy specifically is that while we know which works are his, we don’t exactly know who he is or how to find him. He’s kind of sneaky that way and has gone through his whole career in secrecy. That may pose a problem but he does have a website so reaching out to create a positive message about the VW brand would be a great way to advertise and would draw a lot of people just because of the fact that it’s art. Tying in with the brand, the words in the picture read “The dark behind you doesn’t diminish the light ahead”. For those that don’t know, the Beetle was designed under orders from Hitler, who wasn’t the most fun guy to socialize with. There were some dark things going on in those times but look at how Volkswagen has grown since then. While you should never forget your roots, they do NOT define where you can go and how successful you will be

advertisements and ideas from the deep recesses of my brain